The recent on air killing of news reporter Alison Parker and cameraman Adam Ward sparked nationwide outrage and disgust. After the shooting, killer Vester Lee Flanagan posted his pov of the killing to his facebook page. The video was also posted on youtube but was later removed. I got to see the killers pov video before it was removed and have my doubts. For one, the killer approached the victims in plain sight. He clearly exposed his weapon for awhile before any firing took place. Although Allison was engaged in an interview, its hard to believe that through peripheral vision, no one was able to see the approaching gunman or saw him brandishing his gun. Secondly, the man who claims to be Alison’s fiance in interviews, was never in a relationship with her. You can tell that he wasn’t grief stricken through his cold and robotic demeanor on air (proof provided in videos below). Third, if you slow mo the killers pov video, you can tell that Alison was not shot. Things are just not adding up in this case. If someone died, this is truly a tragedy, but we are not hearing the truth from mainstream media. Don’t believe me, take a look for yourself. 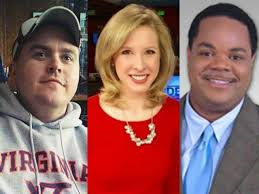