Joh’Vonnie Jackson’s FacebookIt all started earlier this week when Joh’Vonnie Jackson (baby sister of the late Michael Jackson), posted a pic of Andre Vann aka Gepetto Jackson on her Facebook page. The caption on the post read in part “This is outrageous. This man is not Jermaine’s son. He is not a Jackson.”

Joh’Vonnie wrote this post as a rebuttal when Jackson Family cousin LaToya Jackson McCall posted a pic of Vann on her Facebook page referencing him as her “cousin.”  For years, Vann has been saying that he is the “Secret Son” of Jermaine Jackson. Even going so far as to scamming dozens of women out of hundreds of thousands of dollars with promises of jobs and inside connections with the inner circle of the Jackson Family. The most common scenario is Vann baiting the women by befriending them of Facebook and introducing himself as Jermaine Jackson’s son. Eager fans fall for the con by giving Vann money and expensive gifts with the hopes of getting a job in the entertainment industry. Vann has been arrested several in several states on larceny charges.

LaToya Jackson McCall is the granddaughter of Joseph Jackson’s brother Luther. Joh’Vonnie  was infuriated when LaToya posted a pic of Andre Vann. It was inferred by Joh’Vonnie that LaToya even allowed Vann personal access to her father, Joseph Jackson. She publicly scolded LaToya for being stupid enough to allow Vann to fool her.

This isn’t the first time that LaToya has been had by a scammer. Last year she invited Tanisha Rodney aka Tanay Jackson to her wedding. Rodney claimed that she was the daughter of Tito Jackson. While on an appearance  on Tito’s  sons reality show “The Jacksons The Next Generation” it was proven through DNA testing that she was not a member of the Jackson Family. Yet she managed to weasel her way to LaToya’s wedding and take pictures with many family members including Joseph Jackson.

I hope LaToya learns to not be so trusting and I hope someone starts a GoFundMe to get Luther Jackson some front teeth.

One of many of Andre Vann’s Mugshot 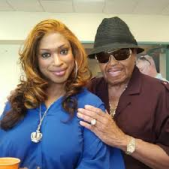 Andre Vann and Tanisha Rodney refer to eachother as “cousins”

One thought on “Joh’Vonnie Jackson Finally Sets The Record Straight!”